A nice little pen that I acquired recently at a French car boot sale. I particularly like this 'x ray' celluloid, which seems to be very much a French thing - at least, I've never seen it on an English pen, and it doesn't seem to be common in Italian vintage either. This is particularly nice because the colour is a sort of orangey pink like rose hip syrup. 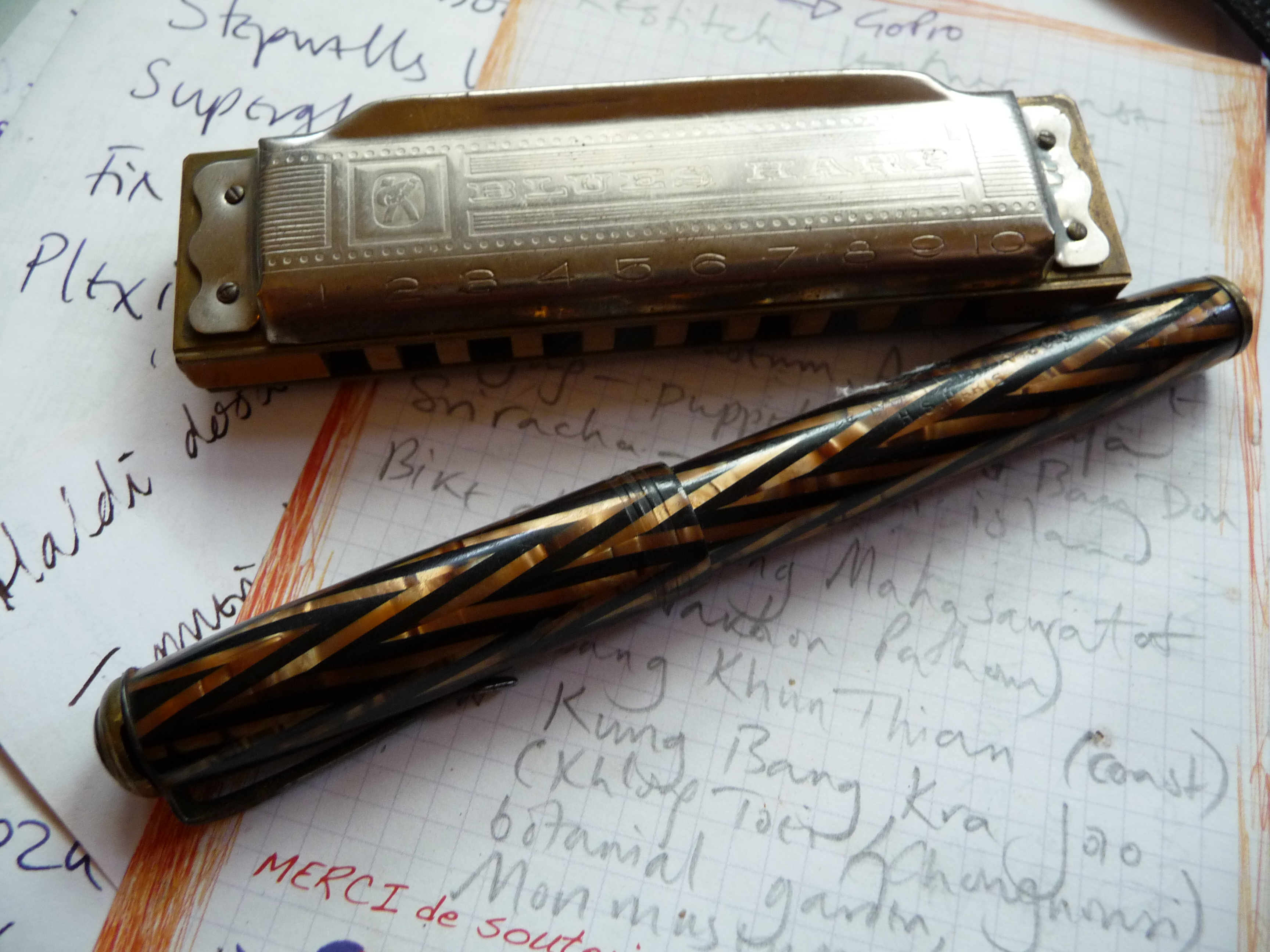 It's a Matcher pen - Matcher Colombes was a French manufacturer that's not terribly well known but seems to have turned out rather nice pens. Or put another way, I've managed to find five or six over the years and they've all been good quality.

Unfortunately I'm going to have my work cut out with this one. I'm pretty sure the clip is a replacement, and it doesn't fit all that well, and the cap rings are missing. But it's still a stunning bit of celluloid.
Posted by Andrea Kirkby at 05:59 No comments:

Hello Kitty! a Waterman with a purr

Many collectors focus on top of the range pens, but school pens and 'fun' ranges provide plenty of fun too. Trying to track down all the variants of the Sheaffer No-nonsense. Pelikan Pelikano or Waterman Kultur can be addictive.

And one thing I do love about school pens is their quirky nature. Pelikan's various youth ranges have some splendid prints, and here's a Waterman that amused me with its little cats chasing mice along the barrel. (Sorry, I got them upside down in the picture.) There's even a tiny mouse on the end of the barrel. 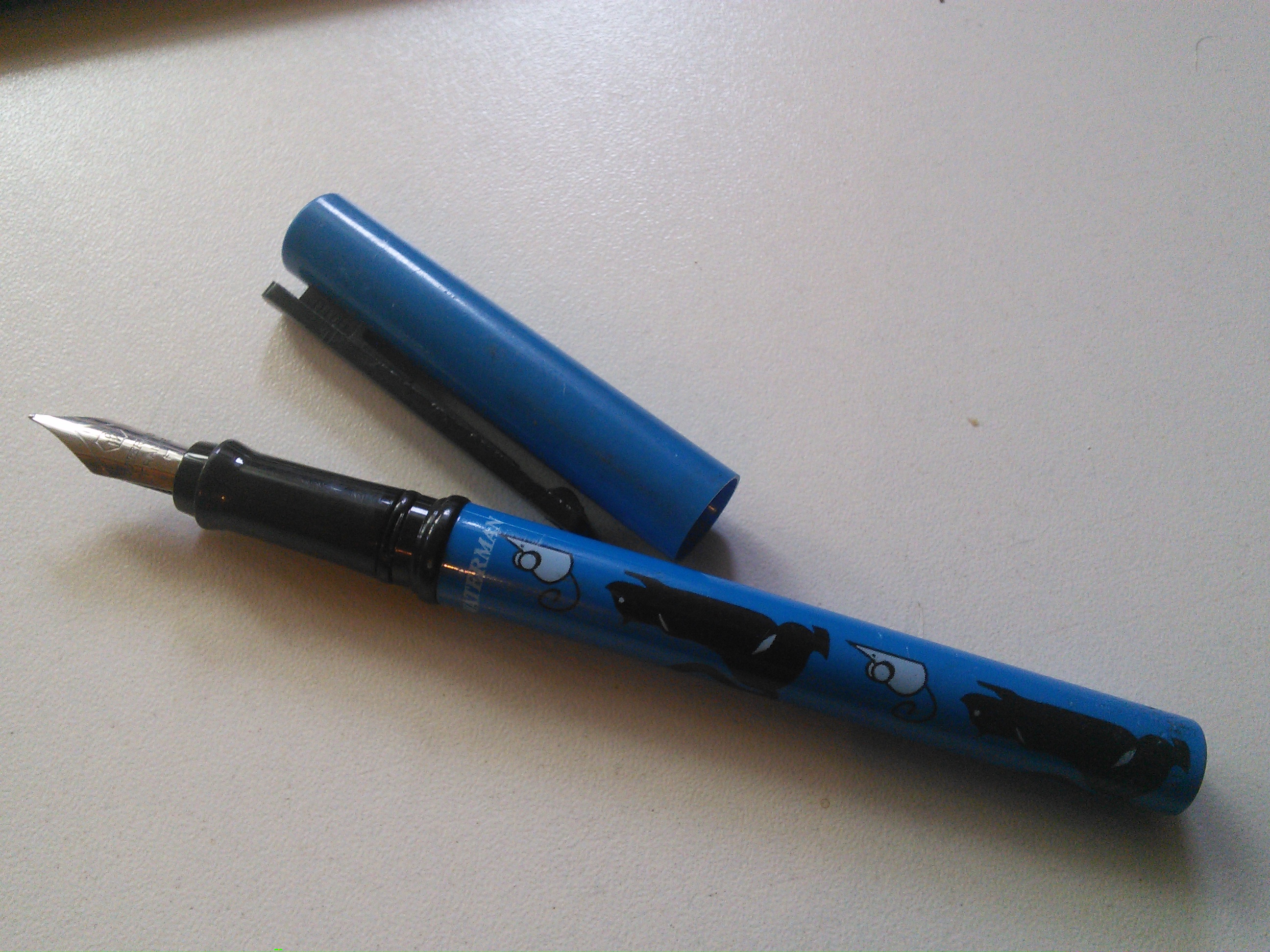 Now if only I could get a Nakaya version...
Posted by Andrea Kirkby at 06:07 No comments:

This little pen is quite an oddity. Its proportions - cap to barrel, turning knob to barrel - are those of a safety pen; the cap is relatively short. And like a safety pen, it has a nib that twists out when you turn the little knob.

It's not a safety, though. Like the Pilot VP it's a cartridge/converter pen with a retractable nib.

It's quite an attractive little beast. Quite sleek, in dark blue anodised metal and black plastic. That sleekness is maximised by having the wide clip flush with the body - it's only when you push on the top of the cap that the clip pops up ready to grab your shirt pocket. There's also a nicely understated detail of knurling at the cap lip and on the barrel end of the turning knob.

I'm not as much an admirer of the branding, the Harley-Davidson logo on a little black cartouche on the barrel, but it's discreet and robustly applied - it's not going to fall off or rub off when you use the pen.

The section is gently tapered and has a small lip to prevent your fingers sliding down. Turn the knob and out comes a rather nice steel nib, a two-tone nib with vertical lines giving it a slightly Art Deco feel and no branding at all. It's quite austere and it fits the overall aesthetic of the pen quite nicely, besides being slightly reminiscent of the Harley shield with its bar across.

The section unscrews, giving access to the nib carriage, a metal insert which accepts a mini cartridge (haven't tried with a standard international).

It's a long pen, nearly 14cm capped, and it's pretty heavy, too.

I do like this pen, but I wonder why it's retractable? The big advantage of retractable pens like the Lamy Dialog or the Pilot VP/Capless is that you can simply press to get the nib out, so they're really convenient for writing occasional notes. This pen, though, has to be uncapped, and then you have to twist the nib out too, so it's even less convenient than using a standard pen.

With the safety pen back in the 1920 or 1930s, of course, the retraction of the nib closed off the ink reservoir, preventing leakage in your pocket. But this isn't a safety pen - it's just a disguised cartridge/converter. So the twist mechanism doesn't fulfil any useful purpose.

It does write nicely. Although it's a fairly heavy pen I've found it really enjoyable for longer stretches of writing. The section is comfortable and the pen is nicely balanced; I think most of the weight is in the nib carrier.

Harley doesn't make its own pens. There's a  Waterman Kultur that was made for Harley, in three versions, with rather lurid printed designs, but I don't think Waterman made this pen. I have heard that it may have been put together by Stypen, another French manufacturer (which was acquired by BIC in 2004), but I don't have any evidence for that, though it does seem to use a similar mechanism to the Stypen UP (http://fpgeeks.com/forum/showthread.php/7408-Stypen-Up-a-cheap-retractable). The section even looks slightly similar.

Final verdict? Well, the engineering is really lovely, but it's not all that useful. But all in all, it's a successful pen, and I think does a good job of extending the Harley branding both as regards design and mechanical nous.

Remarkably, I've managed to find two of these pens this year, although unfortunately the second one came without its cap. (I had a good ferret in the bottom of the pen box, but no, it was nowhere to be found.) This one is in a rather fetching pinstripe. 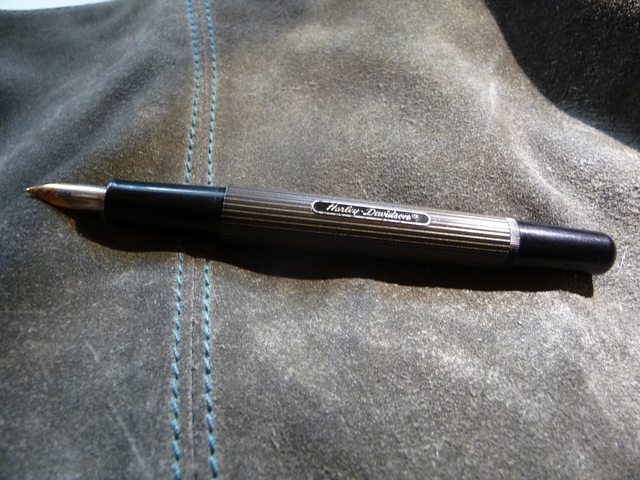 Posted by Andrea Kirkby at 05:26 No comments: