Why I love Rohrer & Klingner

I am not the world's biggest ink collector by a long way. I have a few inks, but I'm not a collector.

I'm not all that conservative with my ink choices either. I like purples, oranges, lime greens, post box reds, lurid fuchsia.

I have one bottle of Quick blue-black. I probably won't get through it in my lifetime. I regard blue-black as a loathsome confidence trick. It's not black, it's not blue, and it's one of those kinds of compromises which makes life utterly unlivable. "Even in the face of Armageddon, never compromise." 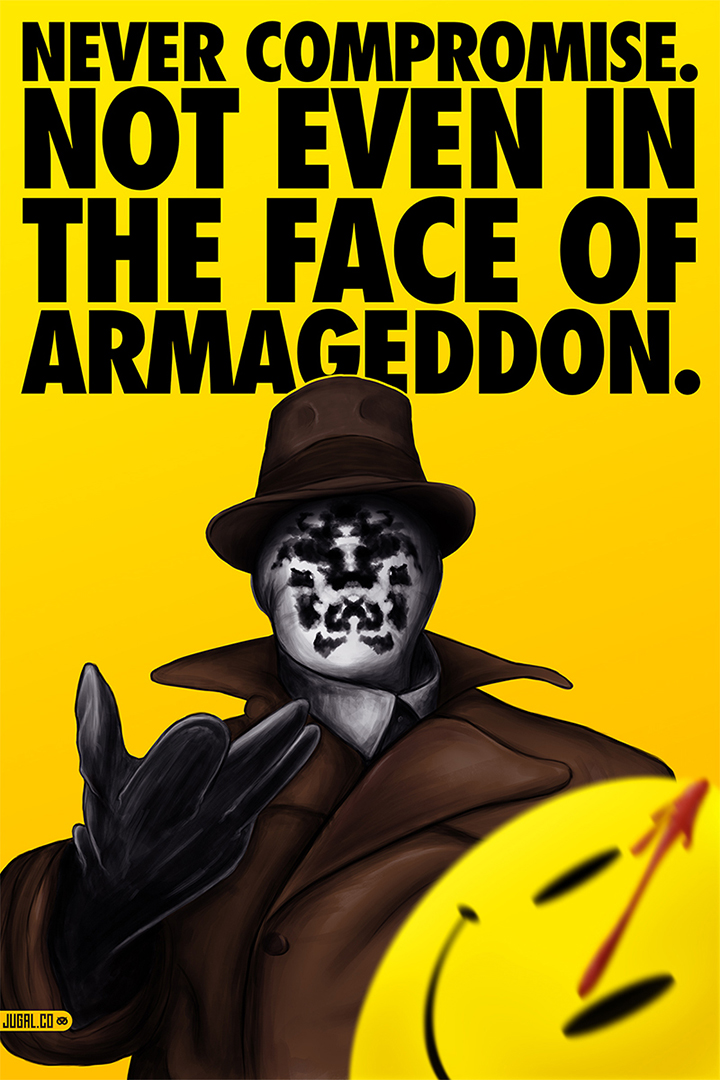 But I also find it difficult to give up a wad of money for an ink. I have a few Pilot Iroshizuku inks that I love dearly, but a price point of 30 plus euros for a bottle makes me uncomfortable.

And I like my inks wet. I like my pens to write like fire hoses. I use broad nibs and love them. I find a lot of really lovely inks annoy me by writing dry. (Jacques Herbin I'm looking at you.) 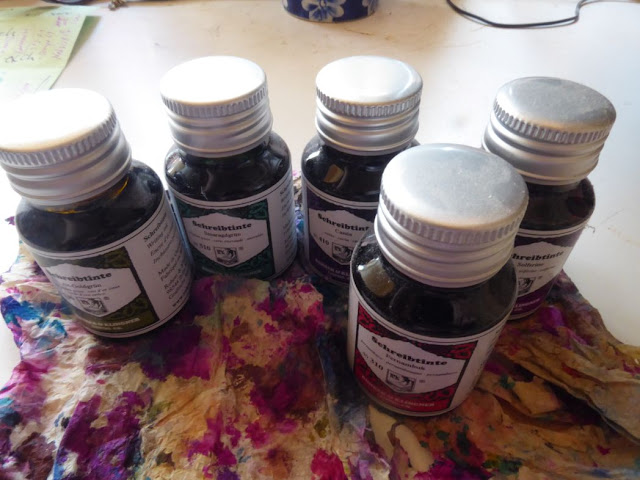 So I love Rohrer & Klingner. It's got everything I want.


Actually I really like the bottles. They have wide enough mouths that I'm not worried about dipping my chunkier pens, and they're good and stable, and in nice heavy glass that doesn't threaten to tip over while I'm filling. They're probably third in my affections to the hexagonal-ish Waterman bottle and the gorgeous (but oh so expensive) Iroshizuku big bottles.

(Actually, make that fourth to my incredible one litre Waterman blue that I found at a flea market!)

I must get some more. R&K doesn't have the most extensive range - certainly not compared to Diamine - but I really do like its colours. I just wish I could find it here in France!

Posted by Andrea Kirkby at 07:36 No comments:

Necessity is the mother of invention

Anyway, Edison couldn't get enough of their stunning Rock Candy material for the Collier, one of my very favourite fountain pens. Which is annoying, as so far I've held off buying one of the Rock Candies, and I really want one, but a few Pelikans and Platinums this year had nearly run me out of pen budget.

But then Brian thought of the darndest thing.

Instead of just picking another material to run with, he put it to a vote.

I voted for subtle. That's fairly unusual for me, but I liked the 'Juniper'.

I thought one of the more vivid colours would wing it.

Oh, blimey. Juniper won. So I've been over to La Couronne du Comte and pre-ordered one.

I really like the way Edison does business. This was an innovative and fun way to bring customers into the decision. It also introduces what is in effect a rather intriguing random element to a special edition, because no one knows how many of these pens will be made - production will stop once the Rock Candy material is available again.

And now I'm off to find a real rarity - elastic, which you can't get for love or money in this part of France.
Posted by Andrea Kirkby at 13:26 No comments:

In France, we've been 'unconfined' for a while now and mid sized outdoors events are beginning to occur.

But Thiron-Gardais, a little village in the middle of the Perche, produced no fountain pens. It did produce a couple of nice things, but no pens.

And two hours of searching at Breval today produced an Egyptian statuette (Louvre miniature), two Burmese monks in gilded wood, some really good books and a small pestle and mortar for the kitchen.... but no pens.

I was coming up to the last alley, where the path from the forest turns round and opens up on to what used to be a field and is now a quite nice little housing development, and I saw there were a couple of professionals set up there. Okay, let's have a look.

Oh boy. Look at those Parker 45s! Such bright colours they put the little Pelikano in the shade. 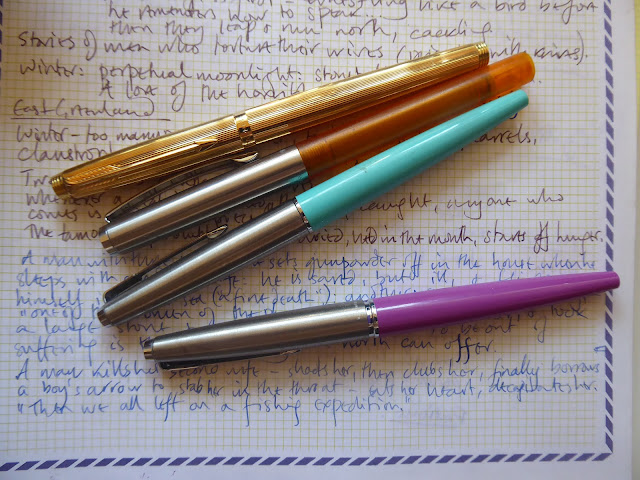 I have a ton of Parker 45s. About 80% of them are in black. Some are flighters. I've never run these cute colours to ground before. Even better, the Pelikano came along for the ride.

These are not high end Viscontis or Omas. These are school pens and a bit better than school pens. But both Pelikano and Parker 45 share qualities that I love - they're well made, well designed, and incredibly usable pens. And I know I'm not going to have any trouble with them - a bit of cleaning up (the Pelikano section is black with dried ink!) and they'll be ready to go.

And then on the next stand, a Parker 75, pristine, with the French lozenge poinçon (hallmark) for 18 karat / 750 gold. It came to me for a lot less than it should have cost and I have managed not to scratch it on the way home.

The thing I love about the 75 is the very nerdy feature of a nib orientation device. It's a bit like the Eversharp flexing device, it's probably more interesting in nerd terms than it is useful in practice. And it eventually disappeared, and the thick bank with its marks, reminiscent of a gear or an indexing device, was replaced by a thin gold band. But this pen has got it. Hurrah!

Altogether I'm ridiculously happy with today. I may not have found many pens, but the ones I did find were absolutely lovely.
Posted by Andrea Kirkby at 08:32 No comments:

Needing some sun in your life?

I need some sunshine in my life.

Cue two pens that have brought it over the past few weeks, alongside some fine joyful inks like Diamine Autumn Oak, Papier Plume House of the Rising Sun, Roher & Klingner Fernambuk, and Herbin Orange Indien. 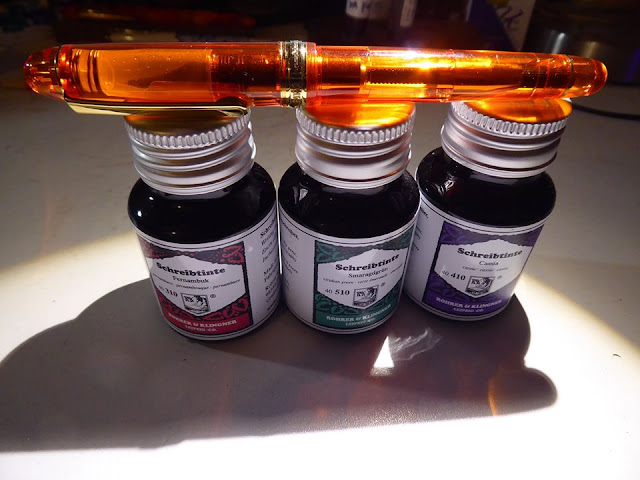 Platinum 3776 special edition 'Apricot' (tarumi) demonstrator for Nagasawa pen shop of Kobe, Japan. I managed to secure this fine implement on eBay and it came with a crisp italic nib. A real delight.  The gold plated clip, cap ring and tail ring are exactly what's needed to pick up this gorgeous colour and make it glow.

Even nicer, it has a little rooster on the nib - Nagasawa's house symbol, the weathervane, and the date 1882 instead of the usual '3776' (height of Mount Fuji, a cheeky homage to another mountain and another penmaker).

I have a mini collection of 3776s. They're adorable pens, and until recently prices were eminently affordable. Unfortunately the price points for some of the special editions are now rather ambitious... but this one I had to have. 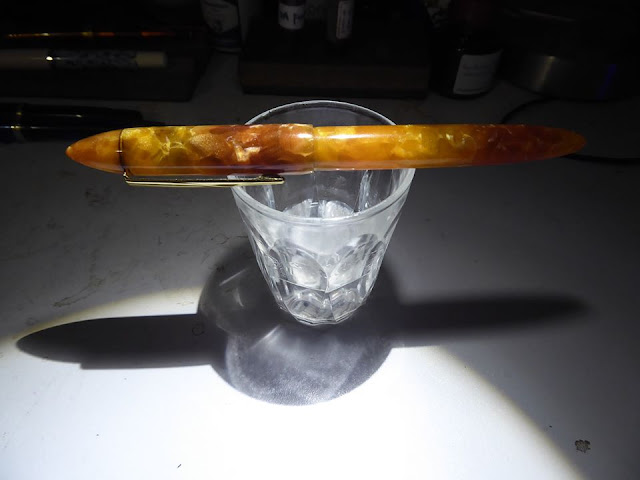 And here is the Edison/Goulet Nouveau Premiere Tequila Sunrise, with a glass of white rum since I didn't have any tequila in the house. It's actually a bit more orange than the picture shows, with more and less intense areas of colour and incredible chatoyance. It's just a bit more summery in feeling than my Edison Collier in Persimmon Swirl, another bright and happy feeling pen from the same stable.

I really adore Edison pens - it's a pity they're not well represented in the EU. Super pens, without bling, in really gorgeous acrylics (and sometimes ebonite). Every one a great little writer. I'm primarily a user, not a collector, and these are pens that I reach for time and again when I need to ink up and get writing.

And this one brought me a lovely dose of Vitamin D just when I needed it.
Posted by Andrea Kirkby at 06:26 No comments:

I love Bayard fountain pens - but they used some very shrinkage-prone celluloids.

Yes, they're very colourful and characterful celluloids. But they shrink.

Quite often you'll find a little bump around the lever axle. That's not a problem.

What is a problem is that the lever won't actually close any more.


There are a few things that help.


I got all my Excelsiors working nicely. Hurrah!
Posted by Andrea Kirkby at 12:40 No comments: