They're stunning pens, and really unusual, with the simple but dramatic lines that are characteristic of Faber Castell's range. First of all; they're not round. The Ondoro is hexagonal. It won't roll when you put it on the desk.

Secondly, the pen has a bright chrome finished cap.  Very, very shiny, and also quite heavy. (I don't mind that as I very rarely write with a pen posted, but I imagine it could make the pens a bit top-heavy if you do post.)

Both these pens also stand out for the material of which they're made. The orange pen is not neon orange or acid drop orange but the kind of orange that was popular in the 1950s and 1960s,a really strong, saturated colour in a solid, hard resin. And the smoked oak version is solid wood, nicely finished with a metal tassie on the end; the oak is dark, with a coarse, almost black grain that gives it depth and interest. The surface is not waxed and polished; it's sanded smooth but the grain still opens the wood up in tiny fissures, again giving it depth and a really natural feeling. (I detest over-finished wood; if you've got wood, why make it feel like plastic?)

Both pens feel weighty (the oak is heavier, I suspect mainly due to the need for metal inserts and the metal section) and they feel very satisfying in the hand. 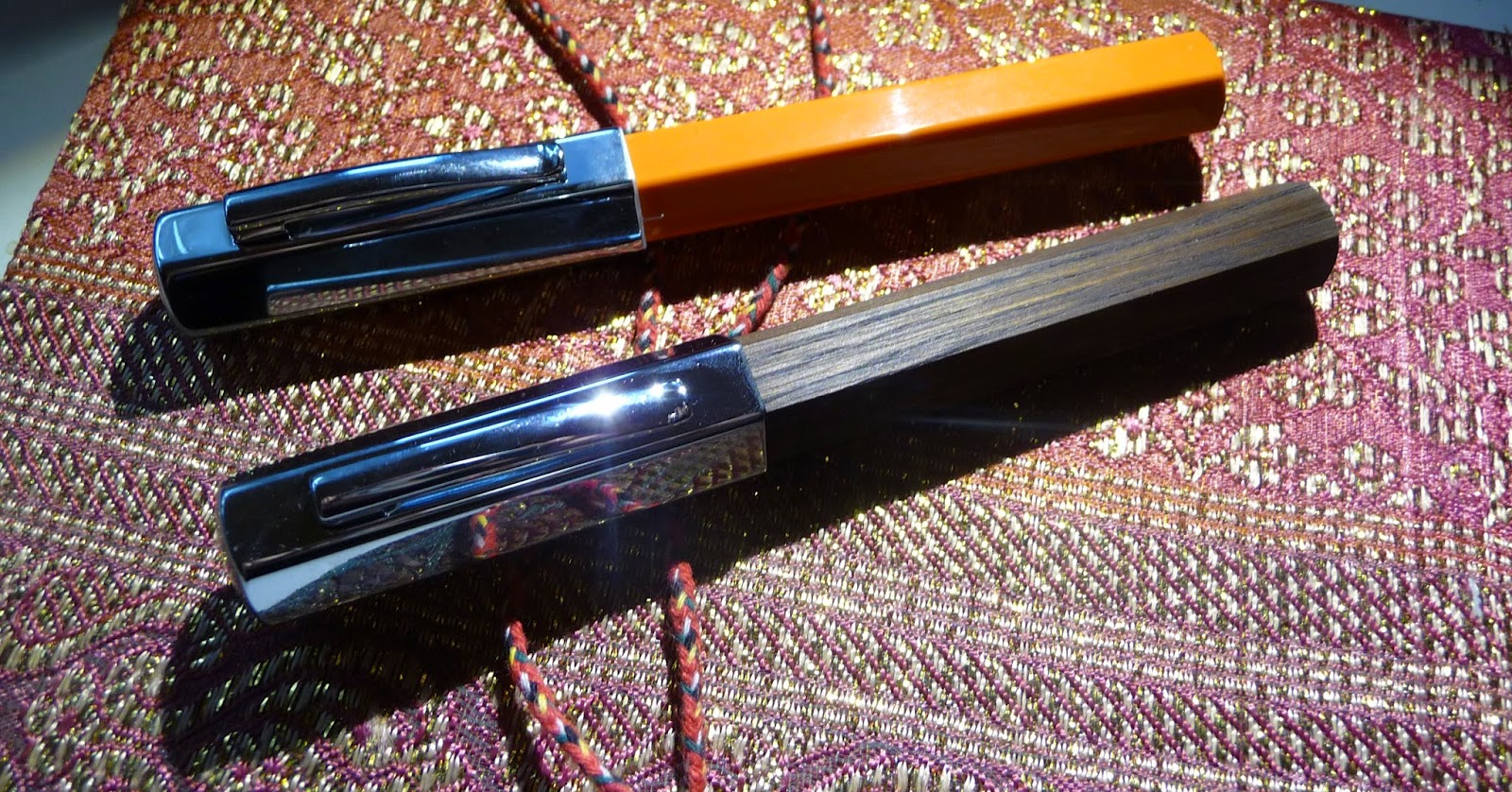 Faber Castell has the same German design vibes as Lamy or Kaweco - strong, simple, well engineered. For instance the transition from hexagonal to round just above the section is handled with great simplicity not by rounding it off, but by cutting darts into the hexagon, leaving a series of boldly defined arches that remind me of the pendentives of a dome.  The clip is a strong geometrical form, one great curve with a crimp at the end, in the same chrome as the cap.

I like the nibs - strong, simple steel nibs with no breather holes, and an almost invisible ink slit, spattered with a grid of tiny dots that reminds me oddly of Rhodia paper, and the nib size prominent. They're more conventional in shape than a Lamy nib, but the treatment is sufficiently unusual that they still stand out.
The section is concave, and small compared to the size of the pen, but I find it very comfortable (unlike some of FC's other pens that I've tried). It's also very elegant - a nice curvy touch on a pen that otherwise is dominated by straight lines. This is quite a fat pen, but the section is relatively slim, which I like a lot - it seems to deliver the controllability for the fingers of a smaller pen, but with the nice feel in the hand of an oversize. (Figures on this; just using the ruler, I reckon Lamy Joy has a section width of 10mm while the Ondoro just shades down to 9mm at its narrowest point. I might revisit that with a Vernier gauge some time.)

On the oak pen, the section is in chrome: normally I don't go much for metal sections, but here it works nicely.

Things I don't like? The little Faber Castell knights on the nib are too small and fiddly, and don't quite integrate with the rest of the design. The orange pen (though not the oak) has a tiny bit of sharpness left on the line of transition between hex and round on the barrel. And I find the clip cap quite hard to push on; it's far more positive than other clip caps I have, and you need to match it up to the pen just right or it won't push on.

(I should also say if you want to put this pen in a shirt pocket, you might want to know that the clip is not spring loaded like the Lamy 2000. As these are going to be desk pens for me, I'm not bothered.)

What does the nib deliver? No flex, a little bit of line variation, but these broad nibs wrote nice and smooth and wet right out of the box. A teensy bit of feedback but no scratchiness, no hesitation or dry starting, and as for the line variation, a trip to a nibmeister might be indicated at some point. I'm impressed. I have never tried a FC nib that's been less than 100%.

So let's cut to the chase. A pen with really different looks and a spot on nib, really decently engineered, and great slightly industrial, slightly retro design. You might hate it, if you find the section too small or don't like hexagonal pens. But I love it, in both versions.

Cats and pens seem to go together. I know so many collectors with cats, and they even turn up in pictures every so often.

So I adored this advert from French manufacturer Gold Starry, featuring a very smug and happy white cat. (She is, I think, the alter ego of the famous Le Chat Noir.) 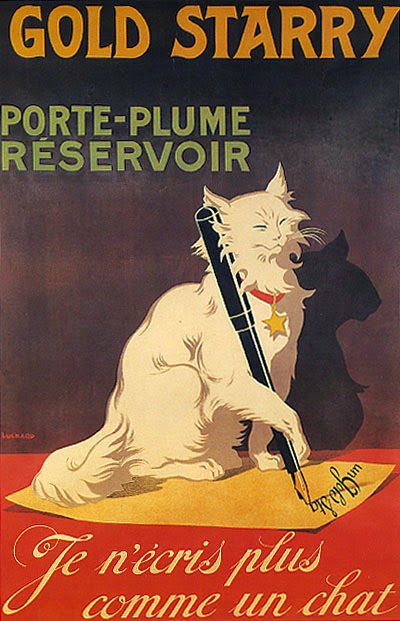 "Je n'ecris plus comme un chat," she says. For those who don't speak French, you describe someone as 'writing like a cat' when they have completely illegibile writing that looks as if a spider took a swim in the ink and then crawled speedily about the page. This cat, on the other hand, is able to write a beautifully modulated hand (or perhaps paw) with her beautiful new fountain pen.

Naturally, she has a gold star hung from her collar - the same star that's found on the Gol Starry nib. And she's writing what I suppose can only be her letter to Santa - "un Gold Sta..."
Posted by Andrea Kirkby at 07:19 No comments: