Sheaffer No-Nonsense Old Timer - the past made new

Sheaffer No-Nonsense pens are lovely cheapies, for the most part; but every so often you find one that has a bit more class to it. That's the case with this 'old timer', black plastic that is patterned in a nod to the chased black hard rubber pens of the early 20th century.
I found this one in the wild, together with a bunch of rather similar advertising pens that weren't anything to shout out about. This is a lovely pen. A good nib, a wide metal cap ring, and that zig-zaggy pattern that brings it all alive. Quite clearly, the designer looked at the classic Sheaffer flat-tops of the 1920s as his inspiration, and the pen embodies all the best aspects - the gold plated cap band and section ring and clip, the shape, the gently flared section, and the chasing.

Unlike the original BCHR flat tops, it's made of robust plastic instead of fragile ebonite, and it is a cartridge-converter not a lever filler (and this one had the converter in, which almost never happens!). It has a steel nib, with gold plating, rather than the unplated steel nib of the lower-end No-Nonsenses. It feels good quality - one of the benefits of having caught it in the wild is that it was sitting next to very similar, but crappy, pens, and just looking at the clips, the detail of the section, and the crispness of this material set against the rather soft and easily scratched plastic of the other pens, I could understand just what a good job Sheaffer had done.

There are, I think, six patterns in total in the 'Old Timer' range. I have two. The photo below is not a good one, but you can see the pattern here - a sort of spiral of chasing around the pen that Penhero calls 'flamme'. 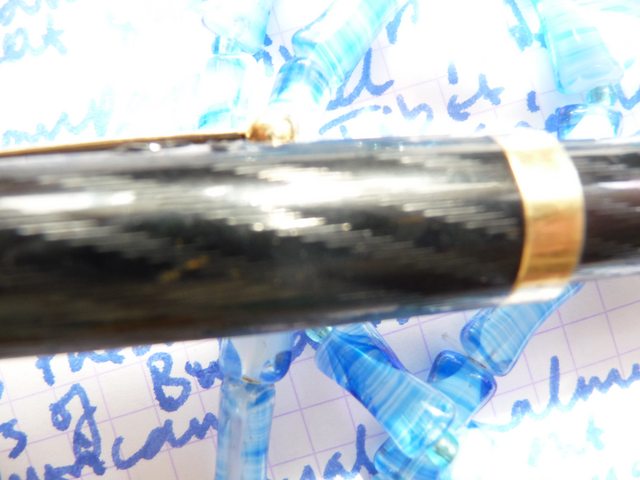 The No-Nonsense originally came out in 1969, and belongs to a generation of pens from the Big Three that look back to the golden age. There's the new Parker Duofold, like the No-Nonsense looking back to the great flat-tops of the classic period; that came out nearly twenty years later, in 1987. There's Waterman's Lady Elsa, reusing old galalith stock to create colourful petite pens, and Charleston with its references to the Hundred Year Pen in its shape and mid-barrel band, and the 3V's clip attachment with the hexagon on top of the cap.  But these are later pens - Sheaffer, I think, got there first. Even Parker's Big Red - like the No-Nonsense a plastic pen modelled on the flat-tops of the golden age - didn't get there till 1970; Parker might claim they had the idea first, but they took too long getting going. (And they closed the line down after only ten years, while Sheaffer is still producing a version of the No-Nonsense, the Viewpoint, as a calligraphy pen.)

If you're looking for a modern pen to collect that's not too expensive, the No-Nonsense is right up there with the Waterman Kultur in my book. These Old-Timers, and the associated Vintage models (with gold-plasted discs on the barrel and cap ends), tend to sell for a bit more than the others, but there are loads of these pens floating around out there - and the chase, of course, is half the fun.

Posted by Andrea Kirkby at 06:08 No comments:

The smell of sandalwood

I haven't made a lot of progress on my acquisition of handmade pens this year, partly for financial reasons and partly, also, because I haven't been able to get to pen shows this year. (And I'm going to miss ROC in Paris as well, which I had rather been looking forward to, because I have two separate clashes that day.)

But I got one box ticked already, a lovely pen from Manoj at Fosfor Pens. He'd made a Pelikan-alike for himself and I enquired about a similar pen - pretty much an M-1000. I like wooden pens, so sandalwood with black ebonite accents works beautifully for me. (Actually it's sandalwood around an ebonite core, so there is more ebonite than meets the eye.)

The only thing I find slightly disappointing is the clip - and that's only because I've put the pen together with a bunch of Pelikans to photograph and I now think that I want it to have exactly the same clip. It's a lovely pen, stinks of sandalwood even after a good deal of use, and is much lighter in the hand than the size would suggest.

I was also able to pick the section out of a number of suggested types, so I have a section with a gentle concave flare. It fits my hand very nicely indeed. It's little details like that which make ordering a custom pen such a great experience. I even got photographs sent me of the blocks of wood that were being used to make up the order, and an 'exploded' view of the pen before it was assembled. A fantastic service, all in all.

Of course, it's not a completely accurate Pel-alike. Besides the clip, I have to admit it's not a piston filler (it's C/C), and the nib isn't a Pelikan, because the Pel nibs won't work with the Schmidt/jowo converters... But it was a lot, and I mean a lot, less expensive than ordering an M-1000!

The wood is really nicely finished - polished beautifully - and the black ebonite shines gloriously. There's something rather nice about the way the soft gleam of the wood complements the bright sparkle of the ebonite.

I ended up taking a pic today because Vaibhav Mehandiratta started a thread on FPGeeks with amazing photos.... and he's suggesting a group buy. I'm in!

Posted by Andrea Kirkby at 04:40 No comments: